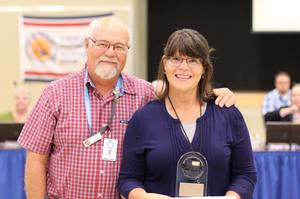 Leslie Schelly was the recipient of the Governing Board Recognition and Excellence Award.

The Governing Board of the Hemet Unified School District, on nomination by Trustee Vic Scavarda, has selected Leslie Schelly, Secretary at Idyllwild School, as the September recipient of the Governing Board Recognition and Award.

Leslie Schelly has been Idyllwild School’s attendance secretary for the last two years.  Prior to her employment, Leslie and her husband, Chip, were heavily involved with Idyllwild School as the parents of three former students who went on to graduate from Hemet High School and then on to Brigham Young University.

Leslie has quickly come to know all the names of the students at Idyllwild School  She has dedicated herself to becoming quite adept at using the AERIES program and the Google drive.  Idyllwild’s attendance has vastly improved due to Leslie’s dedication, including reaching our goal of 96% Average Daily Attendance (ADA) last year.   Leslie has served on Idyllwild’s 5/10-K Committee, Volunteer Recognition Committee, and has been involved in the planning of Red Ribbon Week.

Mrs. Schelly is a true asset to Idyllwild’s positive office environment.  She is usually the first friendly face students and parents see when they enter the office.   She is extremely conscientious and conducts herself with the utmost integrity.  Leslie truly serves as an outstanding ambassador for Idyllwild School!

For outstanding performance, professionalism and loyalty to the Hemet Unified School District, Trustee Vic Scavarda presented Leslie Schelly with the Governing Board Recognition of Excellence Award and a $500 certificate to be used toward the District program of her choice.