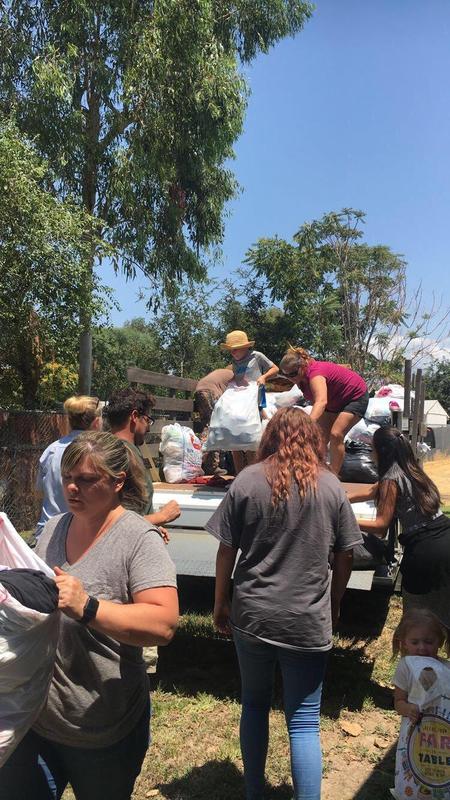 The community worked together to help support and provide to families in need.

Hemet Unified School District (HUSD) students are beginning another school year and we are excited to see what this year brings as we welcome nearly 22,000 students for the new 2018-19 school year!

During this chaotic time, community members throughout the area worked together to support their fellow neighbors in any way they could. Citizens began donating water, food and clothes; HUSD’s Transportation Department assisted in evacuations; schools began opening for residents so they could access showers; and citizens began posting on Facebook to look for new ways in which they could continue to support those that were affected by the fire and power outages.

As the power came back on in these communities and families returned home, families found another challenge they needed to address. With the lack of power, all food that was in the refrigerator needed to be discarded because it had spoiled. Families needed to restock their food supply, but had little money left over to take their children school clothes shopping for the first day of school.

After discovering this need, HUSD’s Parent Resource Center began reaching out to local businesses and community groups to request clothing donations. Therapeutic Horsemanship Equestrian (T.H.E.) Center provided the clothing donations within 24 hours of the Parent Resource Center request. Staff began sorting through the clothes and quickly realized washing the clothes at our facilities was going to take too long and families wouldn’t have access to the donations before the first day of school.

Staff began reaching out to local laundromats to see if we could use their facilities to wash the clothes. A local, family-owned laundry facility, Presco Laundry, washed, dried, and folded over 2,000 articles of clothing at no cost, to help our families in need. Fred Presco, the owner, said he was happy to have a chance to give back to the Hemet community which has been very welcoming to him and his family since moving here.

Thanks to the combined effort of T.H.E. Center, Presco Laundry, Hemet High School students, ASPIRE students and the Parent Resource Center, the clothes were delivered to Hamilton K-8 School on Wednesday, August 8. It is in times like these that we are reminded of the generous and compassionate community we live in. A big thank you to everyone that supported families throughout this difficult time and to our first responders, California Edison, Anza Co-Op, and Caltrans for your hard work in ensuring the power was back on and roads were clear by the time school started!